The Plenary meeting of the Kimberley Process Certification Scheme (KPCS) is being hosted by India, the present Kimberley Process (KP) Chair, from 18th to 22nd November 2019 in New Delhi. The Plenary meeting was inaugurated by Commerce Secretary, Dr Anup Wadhawan. Speaking on this occasion Commerce Secretary said that India, as a founding member of KP, has been actively involved in the development of KP as an important protocol in the trade of diamonds which has ensured that 99.8% of the diamonds in the world are conflict-free.

He further added that we need to keep KP efficient and effective as a process to maintain this conflict diamond free status. He informed the gathering that India is committed to making this process stronger in terms of further strengthened administration and implementation, efficient in terms of delivery of what it promises, more transparent and empathetic towards the living standards of people who are dependent on the production, trade and manufacture of diamonds.

In his address, Commerce Secretary stated that India has given leadership to address the issue of differentiation between Natural Diamonds and Lab Grown Diamonds and will take further initiatives to have better differentiation and ensure responsible business on this front. He also said that India always advocates a consensus-based decision-making process, as it ensures that even the weakest voice is heard.

Commerce Secretary informed that India is sensitive to the issues and challenges of artisanal and small scale mining and acknowledges the contribution made by the KP members, observers and agencies for their upliftment.  We need to continue supporting artisanal and small scale mining countries with capacity building, technical assistance and education on valuation, differentiation between Natural and Lab Grown diamonds, the importance of legal and formal mining practices said Commerce Secretary.

The importance of KPCS is immense to India as more than one million people are directly employed by the diamond industry. The industry also plays a pivotal role in sustaining livelihoods of these people.

During the inaugural session meetings of different working groups and committees of the Kimberley Process Certification Scheme (KPCS) were held. Three special forums regarding Financial inclusion and women empowerment through sustainable livelihood creation, Diamond industry - Adapting to change, Diamond origin and identification were also held during the Plenary meeting.

India is one of the founder members of the Kimberley Process Certification Scheme and is the Chair of the Kimberley Process for the year 2019. India had earlier chaired KPCS in the year 2008. Additional Secretary, Department of Commerce, B.B. Swain, has been designated as KP Chair 2019 and Ms Rupa Dutta, Economic Adviser; Department of Commerce has been designated as India’s KP Focal Point.

In 1998, certain rebel movements in Africa (Sierra Leone, Angola, D.R. of Congo, Liberia) were selling, among other things, illegally obtained diamonds – known as conflict diamonds – to fund their wars against legitimate governments.

With a view to finding ways to stop the trade in conflict diamonds, world’s diamond industry, United Nations, Governments and leading NGOs came together and in November 2002 at Interlaken, where the final draft of the Kimberley Process measures was ratified by more than fifty nations. The KPCS came to into effect from 1st January 2003 and evolved into an effective mechanism for stopping the trade in conflict diamonds.

At present, KPCS has 55 members representing 82 countries including EU with 28 members. The Kimberley Process is chaired, on a rotating basis, by participating countries. KP Vice-Chair is generally elected by KP Plenary each year who becomes the Chair in the next year. India is the current Chair of KPCS with Russian Federation as Vice-Chair for the year 2019.

In accordance with the KP Core document, the work of the Kimberley Process is carried out through its seven Working Groups and Committees, which discuss issues on regular basis through teleconferences and exchange of emails and meet twice in a year for an in-person meeting at Intersessional and Plenary meetings organized by KP Chair. Further, based on the requirement, other in-person meetings can also be organized by the Working Group Chair. The KPCS works on the principle of consensus and all the decisions are taken in Plenary session or through written procedure unanimously by all members.

As per the Scheme, each shipment of rough diamonds being exported and imported by crossing an international border be transported in a tamper-proof container and accompanied by a validated Kimberley Process Certificate. The shipment can only be exported to a co-participant country in the KPCS. No uncertified shipments of rough diamonds are permitted to enter a participant country.

Since 2003, India has been actively participating in the KPCS process and is a member of all Working Groups of KP (except for WGAAP).  Department of Commerce is the nodal Department and Gem & Jewellery Export Promotion Council (GJEPC) is designated as the KPCS Importing and Exporting Authority in India. GJEPC is responsible for issuing KP Certificates and is also the custodian of KP Certificates received in the country.

The closing session of the KPCS will be held on 22nd November 2019 in New Delhi and India will hand over the KP Chair to the Russian Federation. 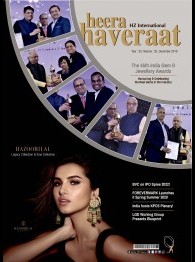