877 Assaying and hallmarking centers in India!

Upon the recent announcement made by the Union Minister for Consumer Affairs, Food and Public Distribution Shri Ram Vilas Paswan that Notification for mandatory Hallmarking of Gold Jewellery & Artefacts across the nation to be issued on 15th January 2020, gem-n-jewellery players have expressed about!

Vaibhav Saraf, Director -Aisshpra Gems and Jewels, “Mandatory hallmarking is a much-awaited decision. This will increase transparency and customer confidence in the industry. The key to successful implementation is going to be the elimination of fake hallmarking centres and rapid expansion in a number of centres and expansion of existing! ”

Tanya Rastogi, Director, Lala Jugal Kishore Jewellers said, “As per a survey was done by World Gold Council, Gold remains the 3rd most popular mode of investment globally. The 56% refraining from investing in Gold do so due to mistrust. The mandatory hallmarking will go a long way in converting them.

The government also needs to provide ample infrastructure and time to launch this mandate otherwise it will create a bottle-neck situation for our already harrowed industry.”

Mr Ishu Datwani, Founder, Anmol, “We welcome the Government's decision to make jewellery hallmarking compulsory. We have been hallmarking all our jewellery pieces ever since hallmarking was introduced in India.

We need more hallmarking centres to be set up so that hallmarking facility is made more accessible to jewellers.”

As on 31st October 2019, there are 877 Assaying and hallmarking centres spread in 234 district locations across the country and so far 26,019 jewellers have taken BIS registration. 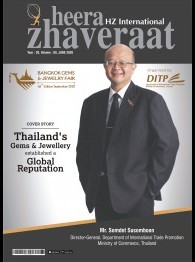