Jewellery retail in Hong Kong has yet to regain its former lustre as July sales of jewellery, watches and clocks, and valuable gifts continued to lag behind pre-pandemic levels in 2019, latest government figures showed.

The pace of growth also slowed compared to jewellery sales in June, which recorded a year-on-year increase of 32 per cent.

Overall retail sales rose 3 per cent in July from a year ago as the local Covid-19 situation continued to stabilise while the labour market, which took a beating at the height of the pandemic, also saw improvements.

“The electronic consumption vouchers that the government began to disburse in August have helped stimulate consumption sentiment and will render support to the retail business in the rest of the year,” a government spokesman was quoted as saying. “Yet, it is essential for the community to keep the epidemic under control and strive towards more widespread vaccination.” Courtesy- jewellerynet. 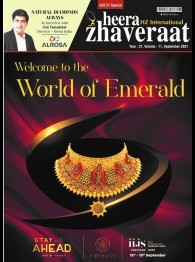