Singapore Exchange Mainboard and Tel-Aviv Exchange listed Sarine Technologies Ltd (“Sarine” and along with its subsidiaries “the Group”) (U77:SI; SARN.TA) a worldwide leader in the development, manufacture and sale of precision technology products for the evaluation, planning, processing, finishing, grading and trading of diamonds and gems, is delighted to announce that its Galaxy® family of scanning and inclusion mapping systems surpassed the milestone of having scanned 30 million stones worldwide in one year.

Since its release into the market in late 2009, the Sarine’s internal inclusion mapping technology, as embodied in the Galaxy® family of systems, has clearly revolutionised planning and production processes by maximising polished diamond yield, while expediting the manufacturing cycle and reducing human error. Six years passed from the introduction of the Galaxy® technology before reaching the milestone of having cumulatively scanned 10 million stones worldwide and, just two years later, 2017 was the first year in which 10 million stones were scanned in a single year. This year's milestone of scanning 30 million stones in a single year is not only significant in itself, but doubly so as an indication of the accelerating adoption of the paradigm, given that in 2019 and 2020 only 18 and 19 million stones were scanned, respectively.

The 30th millionth stone scanned was a 35.50ct rough diamond scanned in Dubai by the Choron Group, who just recently joined the rapidly growing group of producers and rough tender houses who use the Galaxy® technology as part of their digital sales and outreach strategy. To date, the largest diamond scanned worldwide on a Galaxy® system was a 286 carat rough stone, the smallest being a mere 0.013 carat in weight (1.3 points!). Kiran Gems leads all other manufacturers with the most rough diamonds scanned (accumulatively) at their facilities, having processed over 20 million diamonds since they first adopted the Galaxy® technology.

David Block, Chief Executive Officer of Sarine, stated, "Our staff worldwide is jubilant at having achieved this significant milestone. The Galaxy® technology has become the global standard for scanning of rough diamonds across all sizes, qualities and market segments, undoubtedly propelling the industry, along with our world-leading Advisor® planning solution, to a higher level of value. We are confident that our new technologies – the high-speed rough scanner designed for use at the mine's source to enhance traceability and improve internal inventory control, our unique traceability solution – the Sarine Diamond JourneyTM and our AI-based e-Grading TM technology currently in beta-testing, will ultimately also propel the diamond industry to ew levels of efficiency and consumer confidence." 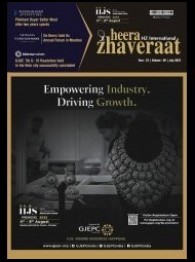